My thanks to Ed Germanov Sensei for a great seminar, early in June, in Chicagoland.

He was hosted by Bob Garza Sensei of the Sosei Aikido Kyokai Organization, based in Worth, IL. Congratulations to Garza Sensei on his beautiful dojo. This was was my first of what I hope are many visits.

The seminar theme was "In The Footsteps Of Shihan," celebrating the lives, friendships, and Aikido that we all cultivated under the powerful instruction of Fumio Toyoda Shihan.

There were many great Aikido techniques taught and many lessons learned over the weekend, but nothing was more powerful and inspiring to me than to just be with my Aikido family again. All the yudansha were asked to say a few words at the end of the seminar, and I have to admit that I was steadily becoming more emotional as my turn to speak came near. (I happened to be one of the last to speak, so there was some time for this to well up...) The gist of my words were this:

It has been an honor and pleasure to train and grow with Feyen Sensei and my friends back in Michigan over the years. It has been an honor and pleasure to train with all of you here in Chicagoland with Toyoda Sensei, and the Toyoda method of training. I have had the opportunity to train in many dojo around the world and I can tell you for a fact that when you walk into a "Toyoda" dojo, you feel it. There is nothing like it. As I work to build my new Dojo in Florida, I thank you for your continued inspiration and support. 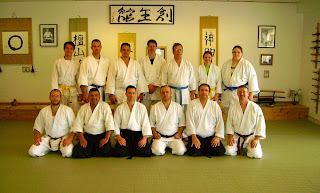 The participants from Yushinkan Dojo are pictured above. Back row from the left: Hung, Ken, Chad, Jeff, Clark, Nicole, and Roseanne. Kneeling in front from left: Scott, Sensei Bob Garza, Sensei Eric Strouse, Sensei Ed Germanov, myself, and Bryan. I think there were 50+ participants throughout the weekend and of course Yushinkan had the largest group in attendance. Just like the old days guys! Thanks to everyone for a great time!
Even though I didn't get any chocolate donuts all weekend...

I want to give special recognition to Eric Strouse Sensei who has taken over as Dojo Cho at Yushinkan for the passed several years. He is doing a remarkable job with the program as was evident by the testing I witnessed back in Michigan, post seminar. Great Job Eric! And to the students, keep up the hard training!